For the 64th episode in Reality, see Minty Meadow (Episode 64).

Minty Meadow is the 5th episode in Candy Crush Saga and the fifth and final episode of World 1 (HTML5). This episode was released on 12 April 2012. The champion title for this episode is Lollipop Ranger.

Before episode:
Misty the unicorn needs a horn. She says to Tiffi, "Alas, what is a unicorn without a horn?".
After episode:
Tiffi brings out a trampoline. Then, Tiffi extracts a string of lollipops from a tree to the unicorn. This string later becomes the recovered horn of the unicorn.

Minty Meadow is an easy - somewhat easy episode, with a mean of 2.93. It contains three somewhat hard levels: 57, 62 and 63. Overall, it is much harder than the previous episode, Chocolate Mountains. 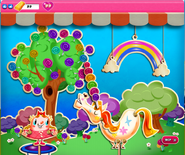 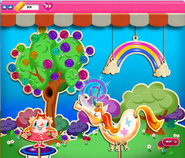 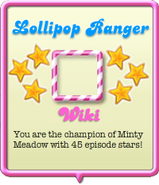 Minty Meadow as the background of this weekend event. 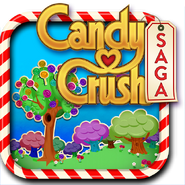