Not to be confused with Minty, the pegasus from Rainbow Runway.

Misty is a main character in Candy Crush Saga. She is a unicorn first encountered in the 5th episode, Minty Meadow. She was crying because she had lost her horn. After completing level 65, Tiffi used a trampoline to take some lollipops from the nearby tree. This string became the recovered horn of the unicorn.

She is one of the characters who appears in the 15th episode, Sweet Surprise after completing level 215. There is also a goof in her picture: her horn is missing.

She appears for the third time in the 39th Reality episode, Biscuit Bungalow, to pop the bubblegum that envelops Pete's house.

In the 66th episode, Soda Swamp, she is bathing with Bobby into the swamp filled with soda.

In the 91st episode, Candied Cliffs, Tiffi happily found her, after being lost in the mountains.

She appears in for the fourth time in the 95th episode, Peppermint Party to celebrate New Year's Day.

In the 132nd episode, Custard Coast, she was afraid of a candy corn that looked like a shark's fin. Tiffi grabs a candy corn to prove Misty that it is just only a candy corn, so that Misty can now take a swim in the sea freely.

In the 155th episode, Sugary Stage, she wants to be the sweetest star the Candy Kingdom has ever seen. Tiffi joins the performance to make sure Misty shines.

In the 204th episode, Waffle Well, Misty wants to drink milkshake from the well but there's only a small amount left at the bottom. Tiffi gives her a giant straw so she can reach the milkshake.

In the 252nd episode, Pearly Pond, she and Tiffi are riding along the pond, with Misty in a yellow float and Tiffi in a wooden boat with an umbrella.

In the 269th episode, Peppermint Parlour, Tiffi becomes her stylist and gives her a makeover.

She appears in Lollipop Lanterns, the 5th episode in the Dreamworld. There is no story that involves her, but she can be seen in the background, but with a dreamy palette-swap.

She appears in the April Fool's Day (2020) episode, Lollipop Meadow. 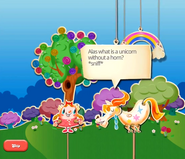 Sweet Surprice, notice the horn is missing (after story)

Reappearance in Biscuit Bungalow (after story)

Wafer Waterfall
Add a photo to this gallery

Lollipop Lanterns (animation)
Add a photo to this gallery

Character on map (after episode, Custard Coast)
Add a photo to this gallery 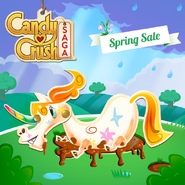 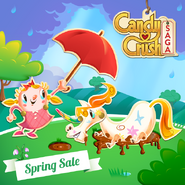 Misty with Tiffi in Spring Sale

Misty's birthday card with the other characters. 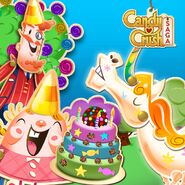 Misty's birthday party background
Add a photo to this gallery 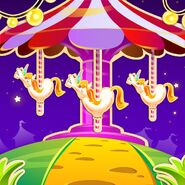 Misty in the 39th episode, Caramel Carousel
Add a photo to this gallery 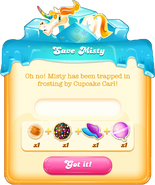 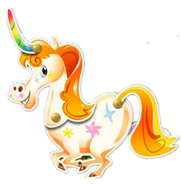 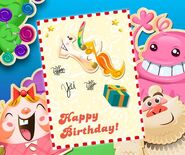 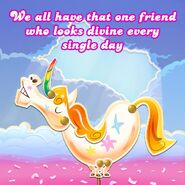 Add a photo to this gallery
Retrieved from "https://candycrush.fandom.com/wiki/Misty?oldid=1656458"
Community content is available under CC-BY-SA unless otherwise noted.