Not to be confused with Claude in the 85th episode, Bonbon Bistro and 100th episode, Delicious Dynasty.

Monkey is a minor character in Candy Crush Saga. She appeared in the 43rd episode, Taffy Tropics. Before introducing level 621, The monkey is hungry, but a snake has coiled itself around the bananas. After completing level 635, Tiffi uses her flute to lure the snake away and the monkey became satisfied.

In the 43rd Dreamworld episode, Banana Bliss, she is on top of lots of bananas, while Tiffi, wearing a turban, plays her flute on top of the snake.

It's my tummy, I can't get to the bananas!

Tiffi plays her flute.
Add a photo to this gallery

Banana Bliss (animation)
Add a photo to this gallery 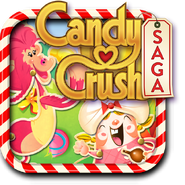 She said "Stealing a piece of cake is a piece of cake."
Add a photo to this gallery
Retrieved from "https://candycrush.fandom.com/wiki/Monkey?oldid=1501954"
Community content is available under CC-BY-SA unless otherwise noted.