Moon Struck was a feature in Dreamworld that was similar to Sugar Crush in the main game. After a certain, predetermined number of moves have been made, Odus flies off the moon scale and all candies which are one or both (depending on the level) of the colours on the moon scale are crushed, and no new candies of that colour (or both colours) will fall onto the board for the duration of the moon struck. When moon struck is activated, the board will light continuously.

After a certain predetermined number of moves (which is often one move, but sometimes several more), the effect ends; Odus flies back onto the Moon Scale which begins again balanced with two new colours that have not been removed, and the removed colour(s) will start falling onto the board again. When moon struck ends, the board will stop lighting.

The moon scale does not tip during the moon struck and it is therefore impossible to fail due to Odus falling while Moon Struck is activated (including on the move that precedes the start of the moon struck). This allows the player the opportunity to use special candies without worrying about their effect on the Moon Scale. Given that the board has only four colours remaining, it is also more likely that the player will be able to create special candies (often one or more are formed by the cascade following the initial removal of colours. The removal of colours may also result in a substantial cascade. This also becomes very helpful in moves levels

Note that if you complete the level's objectives while the moon struck is active, Odus will fly back onto the moon scale prematurely and the colour(s) that was removed will once again fall during Sugar Crush.

There is also a Moon Struck booster available that started from 5 March 2014, although the booster is not available on all devices yet prior the Coral Corral update. 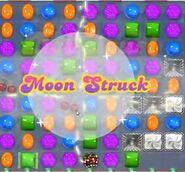 Moon Struck in Google Playstore (Unlike normal moon struck, there is an exclamation mark on the last letter)
Add a photo to this gallery

Board lights up when Moon Struck is activated

Moon Struck is activated
Add a photo to this gallery 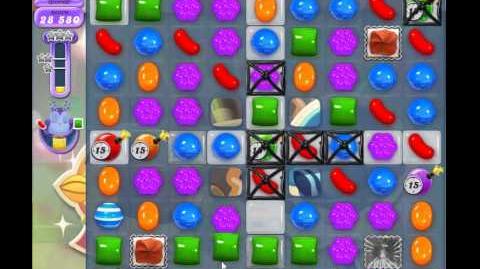 (The sound when moon struck begins)
Retrieved from "https://candycrush.fandom.com/wiki/Moon_Struck?oldid=1460878"
Community content is available under CC-BY-SA unless otherwise noted.