For the phenomenon, see Moon Struck.

Moon Struck was a booster in Candy Crush Saga exclusive to the Dreamworld. It was unlocked in level 15. When activated, it behaved like regular moon struck for 5 moves, whilst keeping the moon scale balanced. It was released on 5 March 2014 along with the new episodes, Cookie Cabana and Dizzy Dessert for only a few players. Players got 3 boosters to try out. Note that this booster was disabled during normal moon struck.

Release the Moon Struck effect and it removes at least one candy colour for 5 moves.

It is not advised to activate the moon struck booster if you are close to filling the moon scale already, unless you really are running out of moves. This booster is most useful for very hard levels that have a very unstable moon scale.

Booster on map
Add a photo to this gallery 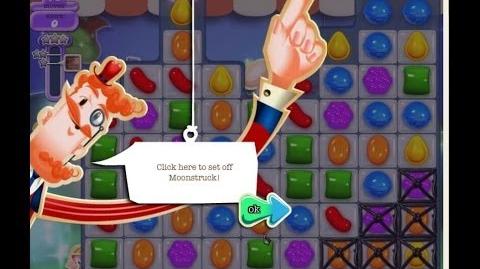 Candy Crush Saga, the NEW Moon Struck Booster
Add a photo to this gallery
Retrieved from "https://candycrush.fandom.com/wiki/Moon_Struck_(booster)?oldid=1369651"
Community content is available under CC-BY-SA unless otherwise noted.