Mr. Snail is a minor character of Candy Crush Saga. He first appears in the 40th episode, Gummy Gardens. Before introducing level 576, Tiffi encounters Mr. Snail, he wonders if he will come on time to the greenhouse for his date. After completing level 590, Tiffi gives the snail balloons, and he doesn't worry about being late anymore.

In the 40th Dreamworld episode, Playful Pavilion, he has a blimp on his back, and rides around in the air, while Tiffi holds balloons.

Brilliant! Thanks little girl!
Add a photo to this gallery

Playful Pavilion (animation)
Add a photo to this gallery 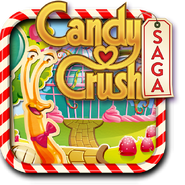 Character seen on Gummy Gardens episode icon
Add a photo to this gallery
Retrieved from "https://candycrush.fandom.com/wiki/Mr._Snail?oldid=570858"
Community content is available under CC-BY-SA unless otherwise noted.