Mr. Toffee is a secondary character in Candy Crush Saga. He gives you some powerup tips if you have trouble with the level. Moreover, only in the King.com version, he is the one who gives you requirements to pass the level. He is a controlled puppet, first seen in the 1st episode, Candy Town.

Mr. Toffee is our quirky yet knowledgeable guide and mentor who runs the Candy Store in Candy Town. The magical day when Mr. Toffee found Tiffi was the best day of his life and since then he has dedicated much of his time teaching Tiffi about the Candy Kingdom.
He is worldly and intelligent, yet modest and always happy to point people in the right direction (quite literally). Everyone loves Mr. Toffee not only because he’s helpful but because he sells the best sweets in the whole of the Candy Kingdom.

Mr. Toffee is very thin and also very tall, more than twice Tiffi's height. He has curly hair that's dyed orange just like his eyebrows, his goatee, and his moustache. His hands are gigantic that it can fit almost his whole head.

Mr. Toffee wears a midget red hat on his head. He wears a red suit with a blue tie. There is a monocle on his eyes. He wears blue pants. He also wears black shoes with golden buttons.

He is caring and he helps Tiffi. Not much is known about his personality though, as he only appears little in the game save starting each level (except Candy Order levels on the web).

Mr. Toffee appears in the 1st episode, Candy Town. Only in the King.com version, he requests you to pass a level in various ways. Also, he appears when you have a problem with a level and he offers you to buy boosters.

He appeared in the 15th episode, Sweet Surprise to surprise Tiffi, alongside other characters. He is seen upside-down, on the top right corner of the screen.

He makes a cameo appearance in the story arcs representing Worlds Eleven and Twelve in Flash. He is the leftmost of the 4 characters to appear in the audience. The three other characters are Denize, Bubblegum Troll, and Mr. Yeti, from left to right.

He also appears in the mobile version, as one of the only three map characters, at Candy Town and Sleepy Slopes.

He appears in Peppermint Party to celebrate New Year's Day!

He appeared in the 133rd episode, Vanilla Villa, but this time as the main character of this episode. He wants to have tea with Tiffi, but he's too tall to fit in the vanilla villa. Tiffi brings out a funhouse mirror, having tea with Mr. Toffee's reflection instead.

In the 305th episode, Meringue Metropolis, he and Tiffi visit the metropolis for a shopping trip. 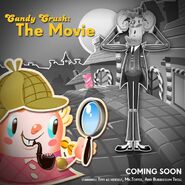 A Candy Crush: The Movie poster during April Fool's Day in 2014 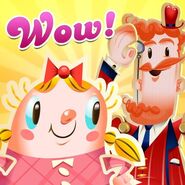 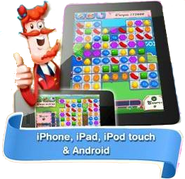 Mr. Toffee with his signature on Misty's birthday card 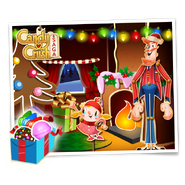 The force is strong in the Soda Universe... 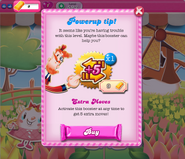 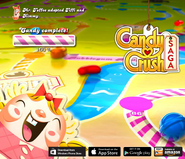 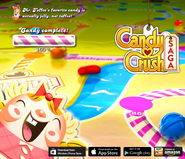 Mr. Toffee and Tiffi on the old versions of the intro screen on mobile devices (version 1.06)

Mr. Toffee's particulars according to candycrushsaga.com

Mr. Toffee on King.com (at the left)

Another view of Mr. Toffee in the CCS television ad 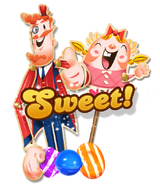