Multilayered Frosting (also known as an Icing Square, Icing or Meringue) is a blocker in Candy Crush Saga. It is the main blocker and the most abundant blocker a player will come across whilst playing the game. As the game progresses, the frosting gathers more and more layers; therefore, it makes the game harder.

Multilayered frosting occupies one square and is stuck until cleared. It can be broken by making matches adjacent to it, or through any special candy's effects reaching the blocker. This procedure needs to be repeated as many times depending on the number of layers. Colour bombs cannot destroy it unless a candy (or candies) next to it is destroyed by the colour bomb. Jelly might be underneath a multilayered frosting, requiring the player to first clear it before reaching the jelly.

A sachet (or one-layered frosting)

New appearance of a sachet (or one-layered frosting)

A property of frosting 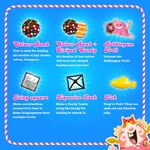 This picture (circa 2013) referred to frosting as icing