Munchy Mansion is the 257th episode in Candy Crush Saga and the second episode of World 52 (HTML5). This episode was released on 26 September 2018. The champion title for this episode is Time Tinkerer.

Tiffi and Nigel are chilling out in the latter's living room. Nigel notices that the lollipop Tiffi is eating looks a lot like the pendulum on his grandfather clock. 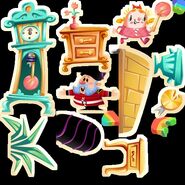 Retrieved from "https://candycrush.fandom.com/wiki/Munchy_Mansion?oldid=1713966"
Community content is available under CC-BY-SA unless otherwise noted.