Munchy Marathon is the 458th episode in Candy Crush Saga and the third episode of World 92 (HTML5). This episode was released on 15 April 2020. The champion title for this episode is Relentless Racer.

Tiffi and Elephant race around the circuit. 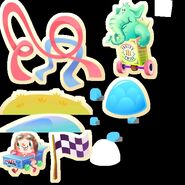