Munchy Marsh is the 217th episode in Candy Crush Saga and the second episode of World 44 (HTML5). This episode was released on 21 March 2018. The champion title for this episode is Topping Pilot.

Allen's spaceship has crashed into the marsh and is stuck. Tiffi shows up in a protective suit to help get his ship unstuck. 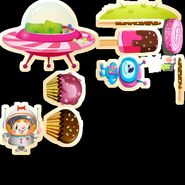