Munchy Meteor is the 362nd episode of Candy Crush Saga and the second episode of World 73 (HTML5). This episode was released on 11 September 2019. The champion title for this episode is Cookie Cutter.

Tiffi and Ellen smash up the comets into chocolate chips to use for their cookies. 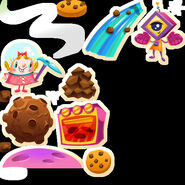 Retrieved from "https://candycrush.fandom.com/wiki/Munchy_Meteor?oldid=1540282"
Community content is available under CC-BY-SA unless otherwise noted.