In April 2021, mystery candies have been removed from all levels. They can only appear in levels in the form of power pops, which is a booster introduced in August 2021.

Mystery candies appeared in almost all levels in Chocolate Barn and after that, their abundance decreased. There were few levels where mystery candies came out from somewhere of the board, otherwise they would never come back. Mystery candies formerly appeared in later levels and would appear once in a while.

Some levels had a constant supply of mystery candies. It is supposed that a few types of hidden dispensers would spawn these mystery candies at certain locations. However, they would not spawn during sugar crush.

Mystery candies revealed both beneficial and harmful elements. All ratings are approximate, which means the table may not be correct.

If you were lucky, you would get a special candy from the egg. These are the possible favourable outcomes.

For special booster candies, the outcome was one of jelly fish, coconut wheel, lucky candy, or extra time candy depending on level type. The Coconut Wheel was an exception that would have appeared in any type of level.

In other cases, you were faced with an extra blocker upon opening a Mystery Candy. Here is a list of all the unfavourable outcomes. They would rarely come out of marmalade.

However, when it was opened on a Conveyor Belt, it could have been a Candy Bomb or a Liquorice Swirl.

These items were exclusive to the Flash version. They never make appearances on the HTML5 version.

This had happened before, but this outcome was restricted to some levels, and happened on the mobile version. It happened when a special candy in marmalade spawned where there used to be a locked candy.

Coconut wheel from mystery candy. This is a candy order level

Level 549 (Jelly level, mobile) with a Coconut Wheel in Marmalade, which can only come out of a mystery candy 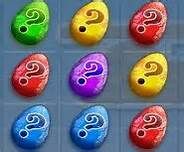 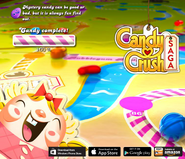 What the mystery candy does

A mystery candy is being unwrapped

A colour bomb is revealed from a mystery candy