Nigel is a minor character in Candy Crush Saga. He is a guard and encountered in the 27th episode, Licorice Tower. Before introducing level 381, he has lost the candy jewels, but Tiffi quickly offers her assistance. After completing level 395 is completed, a Sherlock-esque Tiffi arrives with a hunch: the jewels are under Nigel's giant hat!

In the 124th episode, Apricot Alley, Tiffi uses the liquorice from his hat to reconnect the telephone line.

In the 171st episode, Frosting Fortress, he is looking out from the fortress with a waffle telescope.

In the 206th episode, Choco Chess, he is playing Candy Chess, but the chocolate pieces are melting so Tiffi brings him jelly chess pieces.

In the 242nd episode, Berry Bistro, he and Tiffi make a sweet drink from tea, sugar and various fruit.

In the 257th episode, Munchy Mansion, he and Tiffi are chilling out in the latter's living room. Nigel notices that the lollipop Tiffi's eating looks a lot like the pendulum on his grandfather clock.

In the 27th Dreamworld episode, Fanciful Fort, he is wearing a crown and sitting on a chair acting like a King, jumped for joy and smiling. 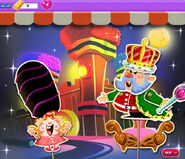 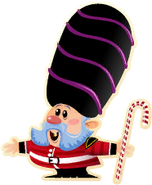