Nightmarishly Hard levels, also called owl levels, are levels officially marked to be a very difficult level by King. They are a proper subset of hexagon levels. The first level with this trait is 31.

Similar to a super hard level, it is usually the most difficult level in an episode. While earlier episodes have a few nightmarishly hard levels per world, they become more common in later episodes, often alternating with "super hard levels". 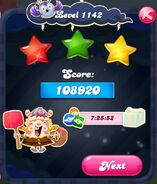 Nightmarishly hard level outro (1142)
Add a photo to this gallery
Retrieved from "https://candycrush.fandom.com/wiki/Nightmarishly_Hard_level?oldid=1587173"
Community content is available under CC-BY-SA unless otherwise noted.