Nocturnal Nuisance was the 44th episode in Dreamworld and the second episode of World 8 of Dreamworld. This episode was released on 22 April 2015. It was the Dreamworld equivalent to the Reality episode Glazed Grove.

This was the final regular Dreamworld episode, the next one served as the grand finale of Dreamworld and wasn't based off of its Reality counterpart.

Tiffi, wearing a crown, appears on the well and throws a red candy to hit the door on small house. Then Freddie opens the door of the house and Tiffi hides under the well at the same time. Finally, he is looking himself for a while, and he goes into the house and close the door.

Nocturnal Nuisance is a very hard episode, with a mean of 5. It has six somewhat hard-hard levels: 636, 639, 644, 646, 648, and 650, as well as a very hard level: 647. Overall, it is slightly easier than the previous episode, Banana Bliss and has the same difficulty as its reality counterpoint, Glazed Grove.

Before story (animation)
Add a photo to this gallery 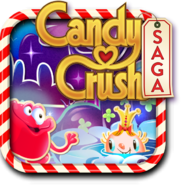 Retrieved from "https://candycrush.fandom.com/wiki/Nocturnal_Nuisance?oldid=1619448"
Community content is available under CC-BY-SA unless otherwise noted.