Nougat Noir is the 57th episode in Candy Crush Saga and the second episode of World 11 (HTML5). This episode was released on 4 February 2015. The champion title for this episode is Private Ice Cream.

Before episode:
Doxen Cooper is investigating a case of theft at the vault.
After episode:
Tiffi shines a flashlight on the Bubblegum Troll, who then drops his loot in a state of panic before going back into hiding.

Nougat Noir is a somewhat easy - medium episode, with a mean of 3.47. It contains four somewhat hard - hard levels: 831, 835, 837 and 842, and one very hard level: 843. However, there are many easy levels. Overall, this episode is still much harder than the previous episode, Candy Calaboose, due to the relatively little difficulty in said episode. 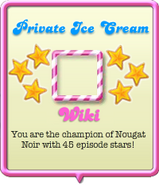 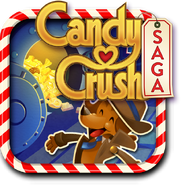