Orangeade Oasis is the 330th episode in Candy Crush Saga and the fifth and final episode of World 66 (HTML5). This episode was released on 12 June 2019. The champion title for this episode is Citrus Chevalier.

Tiffi and Pepe ride paper boats on a river of orange soda. 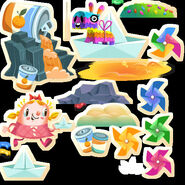