Orderly Office is the 419th episode in Candy Crush Saga and the fourth episode of World 84 (HTML5). This episode was released on 15 January 2020. The champion title for this episode is Secret Stasher.

Tiffi sorts out the stashes of candy on Minty's office. 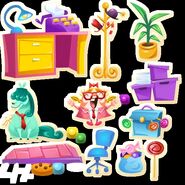