Paper Plains is the 317th episode in Candy Crush Saga and the second episode of World 64 (HTML5). This episode was released on 24 April 2019. The champion title for this episode is Whimsy Wrapper.

Tiffi and Neko use crystal candies to make the pagoda shine. 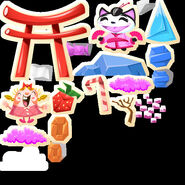