Not to be confused with Party Popper.

Party Popper Booster is a booster in Candy Crush Saga. The booster is unlocked at level 29.

The booster costs 30 gold bars for each purchase (29 for more recent versions).

After activating this booster, a piñata appears on the screen, two party poppers will blow out all candies and clear one layer of blockers (except some), similar to a cake bomb explosion or a colour bomb + colour bomb combination. The piñata will give the player a wrapped and a striped candy, as well as a jelly fish and a color bomb and they will replace random candies or blockers and will go off immediately. The party popper booster affects cake bombs, unlike a regular cake bomb explosion. 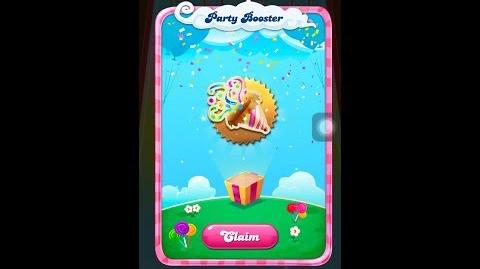 Price
Add a photo to this gallery
Retrieved from "https://candycrush.fandom.com/wiki/Party_Popper_Booster?oldid=1608400"
Community content is available under CC-BY-SA unless otherwise noted.