Party Pyramids is the 323rd episode in Candy Crush Saga and the third episode of World 65 (HTML5). This episode was released on 15 May 2019. The champion title for this episode is Dune Decorator.

Tiffi and Tommy are preparing a party in the desert. Tiffi hangs up blue and green flags, while Tommy has balloons of the same colour. 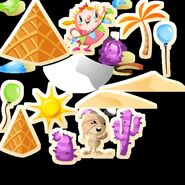