Pastille Pass is the 261st episode in Candy Crush Saga and the first episode of World 53 (HTML5). This episode was released on 16 October 2018. The champion title for this episode is Soaring Seafarer.

The submarine Casey was travelling has cracked, so Tiffi gets some balloons for Casey to float to shore on. 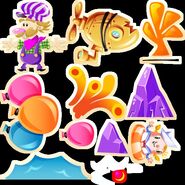