For the episode that was formerly named Pastry Palace, see Chocolate Chamber.

Pastry Palace is the 280th episode in Candy Crush Saga and the fifth and final episode of World 56 (HTML5). This episode was released on 19 December 2018. The champion title for this episode is Snoozy Sleeper. 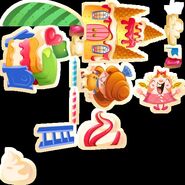