Pearly Pagodas is the 482nd episode in Candy Crush Saga and the second episode of World 97 (HTML5). This episode was released on 10 June 2020. The champion title for this episode is Hovering Hero.

Tiffi watches Claude perform on top of the pagodas. 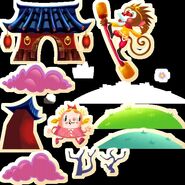