Pearly Parlor is the 184th episode in Candy Crush Saga and the fourth episode of World 37 (HTML5). This episode was released on 30 August 2017. The champion title for this episode is Mirror Master.

Tiffi makes a portrait of Cherry Baroness to hide the broken mirror. 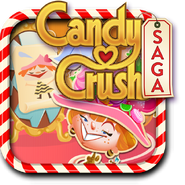