Pearly Pond is the 252nd episode in Candy Crush Saga and the second episode of World 51 (HTML5). This episode was released on 29 August 2018. The champion title for this episode is Sweet Sailor.

Tiffi and Misty ride along the pond, with Misty in a yellow float and Tiffi in a wooden boat with an umbrella. 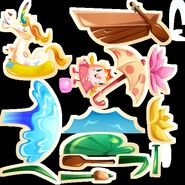