Peppermint Parlour is the 269th episode in Candy Crush Saga and the fourth episode of World 54 (HTML5). This episode was released on 14 November 2018. The champion title for this episode is Sugary Stylist.

Tiffi becomes Misty's stylist and gives her a makeover. 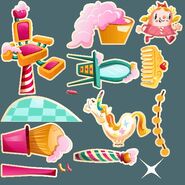