Not to be confused with Pepe.

Pete is a minor character in Candy Crush Saga. He is a pig and encountered in the 39th episode, Biscuit Bungalow with the Bubblegum Troll. Before introducing level 561, Bubblegum Troll blows up his giant bubblegum that blocks Pete's way back to his bungalow. After completing level 575, Tiffi gets out of the screen then rides onto Misty, the unicorn, from the fifth episode, Minty Meadow. She jumps and pops the bubble with the use of her horn.

In the 127th episode, Funky Farm, he tries to fix the broken weather vane found on the roof of the Chocolate Barn, but he doesn't have the proper materials. Tiffi helps him by replacing the vane with a jelly fish.

In the 175th episode, Strawberry Steps, he and Tiffi walk along a pile of strawberries to pass the chocolate flood.

In the 211th episode, Swirly Shack, his house has plants growing out of it, and Tiffi uses her comb and scissors to cut them down.

In the 221st episode, Cookie Chase, he wants to participate in the race, but his car is broken. Tiffi brings some fuel and a wheel to fix up the car.

In the 258th episode, Bakers Bluff, he and Tiffi push a cart of cinnamon swirls up a hill.

In the 301st episode, Fishy Floods, he and Tiffi use a stick to get jelly fish from the river.

In the 39th Dreamworld episode, Snoozy Strike, he becomes a bowling pin, and Tiffi tries to hit him with her bowling ball. 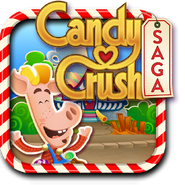 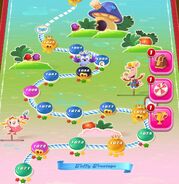 A picture from Taffy Treetops that has him as the main character, instead of Odus.
Community content is available under CC-BY-SA unless otherwise noted.
Advertisement