Pineapple Patch is the 360th episode in Candy Crush Saga and the fifth and final episode of World 72 (HTML5). This episode was released on 4 September 2019. The champion title for this episode is Cake Creator.

Tiffi and Bobby harvest pineapples to use in their cooking. 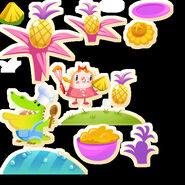