Playful Palace is the 451st episode in Candy Crush Saga and the first episode of World 91 (HTML5). This episode was released on 1 April 2020. The champion title for this episode is Sophisticated Seeker.

Tiffi and Genie Jellybeanie find the map that will lead them to the treasure chest. 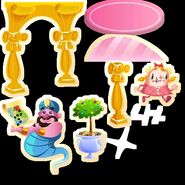 Retrieved from "https://candycrush.fandom.com/wiki/Playful_Palace?oldid=1652777"
Community content is available under CC-BY-SA unless otherwise noted.