Playful Planet is the 441st episode in Candy Crush Saga and the first episode of World 89 (HTML5). This episode was released on 11 March 2020. The champion title for this episode is Cosmic Companion.

Tiffi accompanies Ellen on a tour around the planets. 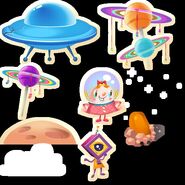