Plushie Party is the 377th episode in Candy Crush Saga and the second episode of World 76 (HTML5). This episode was released on 16 October 2019. The champion title for this episode is Stuffy Sipper.

Tiffi and Milly have a tea party with their stuffed animals. 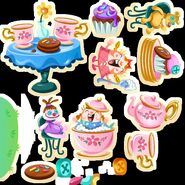