Polkapalooza is the 28th episode in Candy Crush Saga and the third episode of World 6 (HTML5). This episode was released on 17 June 2013. The champion title for this episode is Polka Superstar.

Before episode:
In this episode, Tiffi encounters a guitarist named Mr. Rockstar who cries over his messed up hair.
After episode:
She grabs a sugary hairspray can and sprays his hair which makes it shine again so that his concert can commence.

Polkapalooza is a very easy episode, with a mean of 1.47. Only level 402 can be tricky and is the only in the episode to be rated medium. Overall, it is much easier than the previous episode, Licorice Tower. 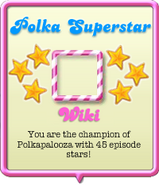 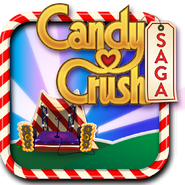