Not to be confused with Polkapalooza (Episode 28).

Polkapalooza is the 352nd episode in Candy Crush Saga and the second episode of World 71 (HTML5). This episode was released on 21 August 2019. The champion title for this episode is Ritzy Roadie.

Tiffi and Mr. Rockstar rock out at the concert. 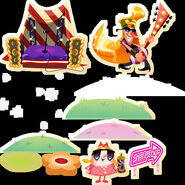 Retrieved from "https://candycrush.fandom.com/wiki/Polkapalooza_(Episode_352)?oldid=1653367"
Community content is available under CC-BY-SA unless otherwise noted.