Popcorn Province is the 327th episode in Candy Crush Saga and the second episode of World 66 (HTML5). This episode was released on 29 May 2019. The champion title for this episode is Kernel King.

Tiffi gets headphones so she can listen to Misty's singing under the bridge. 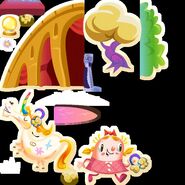