Popping Peninsula is the 207th episode in Candy Crush Saga and the second episode of World 42 (HTML5). This episode was released on 17 January 2018. The champion title for this episode is Kooky Kernel.

Tiffi and Dexter party on a tropical island as the volcano erupts, providing them both with freshly popped popcorn. 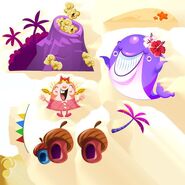