Popsicle Plot is the 431st episode in Candy Crush Saga and the first episode of World 87 (HTML5). This episode was released on 12 February 2020. The champion title for this episode is Vibrant Visitor.

Tiffi calms down a group of scared living popsicles. 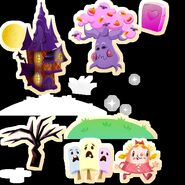