Popsicle Pole is the 357th episode of Candy Crush Saga and the second episode of World 72 (HTML5). This episode was released on 28 August 2019. The champion title for this episode is Melting Maestro.

Minty accidentally got his tongue stuck on a popsicle. Tiffi uses her hairdryer to help him get unstuck. 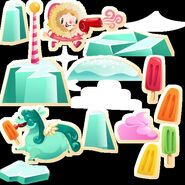 Retrieved from "https://candycrush.fandom.com/wiki/Popsicle_Pole?oldid=1597694"
Community content is available under CC-BY-SA unless otherwise noted.