Not to be confused with Praline Pavilion and Pudding Pagoda.

Praline Pagoda is the 427th episode in Candy Crush Saga and the second episode of World 86 (HTML5). This episode was released on 5 February 2020. The champion title for this episode is Galaxy Gazer.

Tiffi and Little Star stargaze on top of the pagoda. 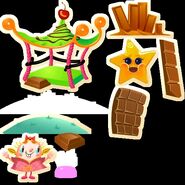