Praline Pavilion is the 129th episode in Candy Crush Saga and the fourth episode of World 26 (HTML5). This episode was released on 10 August 2016. The champion title for this episode is Drizzle Deflector.

It's a rainy day, but the Cherry Baroness wants to go for a stroll around the Truffle Terrace. Therefore, Tiffi helps her by building a praline pavilion. 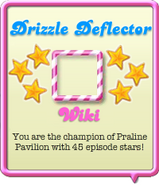 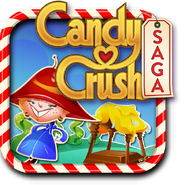