Pretty Porch is the 341st episode in Candy Crush Saga and the first episode of World 69 (HTML5). This episode was released on 17 July 2019. The champion title for this episode is Soda Shaker.

Tiffi and Benny use a special soda to make the house plants grow candies. 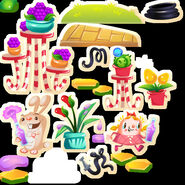