Pudding Pagoda is the 26th episode in Candy Crush Saga and the first episode of World 6 (HTML5). This episode was released on 14 May 2013. The champion title for this episode is Sherbet Shogun.

Before episode:
Neko needs Tiffi to stop Gumzilla (aka Bubblegum Troll) from causing destruction to her pagoda tower.
After episode:
The Gumzilla monster turned out to be the bubblegum troll. Tiffi and the bubblegum troll fight with pretzel sticks until he went back to normal, saying, "I'll be back! HA HA!" and the cat become happy and thanked her.

Pudding Pagoda is an easy episode, with a mean of 2.33. It contains one somewhat hard level: 367. Overall, this episode is slightly harder than the previous episode, Fudge Islands.

What is the matter, Ms. Cat?

Gumzilla is wrecking the Pudding Pagoda! Stop him!

Do not worry! I will take care of Gumzilla! 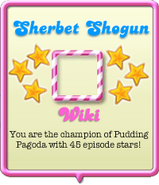 Another view of Pudding Pagoda in the CCS television ad

Another view of Pudding Pagoda in the CCS television ad 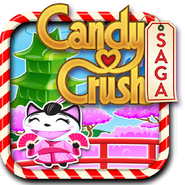