Pudding Panorama is the 314th episode in Candy Crush Saga and the fourth episode of World 63 (HTML5). This episode was released on 17 April 2019. The champion title for this episode is Fancy Flyer.

Tiffi and Cherry Baroness are on a hot air balloon ride. 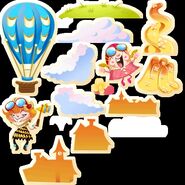