Puffy Pillars is the 289th episode of Candy Crush Saga and the fourth episode of World 58 (HTML5). This episode was released on 23 January 2019. The champion title for this episode is Cake Connector.

Tiffi secures a bridge made of gum to cross the pillars and reach Minty. 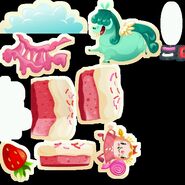 Retrieved from "https://candycrush.fandom.com/wiki/Puffy_Pillars?oldid=1616453"
Community content is available under CC-BY-SA unless otherwise noted.