Pumpkin Parade is the 379th episode in Candy Crush Saga and the fourth episode of World 76 (HTML5). This episode was released on 16 October 2019. The champion title for this episode is Creepy Carver.

Tiffi and Tommy celebrate Halloween at the pumpkin-themed carnival. 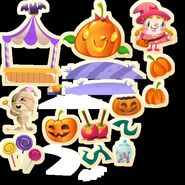