Pumpking Patch is the 197th episode in Candy Crush Saga and the second episode of World 40 (HTML5). This episode was released on 15 November 2017. The champion title for this episode is Topping Trapper.

Benny is upset that the snowy frosting is ruining his pumpkin patch. Tiffi spreads crunchy umbrellas to keep the frost away from the delicious pumpkins. 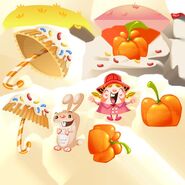