Purple Park is the 291st episode in Candy Crush Saga and the first episode of World 59 (HTML5). This episode was released on 30 January 2019. The champion title for this episode is Piñata Patcher.

Tiffi uses her knitting wool to patch up Pepe. 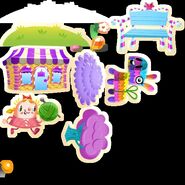