Radiant Reef is the 283rd episode in Candy Crush Saga and the third episode of World 57 (HTML5). This episode was released on 2 January 2019. The champion title for this episode is Delicious Diver.

Tiffi and Dexter discover a crack in the reef that seems to ooze marmalade, much like the cracks in Toasty Terrain. 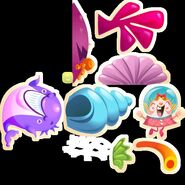