Radiant Road is the 216th episode in Candy Crush Saga and the first episode of World 44 (HTML5). This episode was released on 14 March 2018. The champion title for this episode is Dorky Detective.

One of Benny's easter eggs has cracked, so Tiffi comes to investigate the situation. 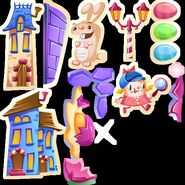 Retrieved from "https://candycrush.fandom.com/wiki/Radiant_Road?oldid=1654275"
Community content is available under CC-BY-SA unless otherwise noted.